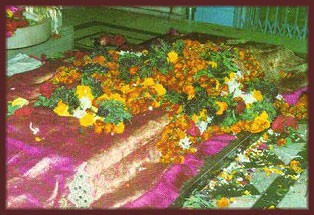 Sai Baba during his last time used to listen devotee voice who was reading sacred book of religion and he express the inner sense of these lines . This went on daily in the mornings and evenings. It was the practice to read sacred books before a person who would die soon.
On 8 October 1918, Sai Baba became very weak. He sat leaning on the wall of the mosque. Aarties and worship were done as usual. The devotees were not allowed to go near him and this was ensured by Shama and Nana Chandorkar. Some people with a tiger in the cart were going round places and earning money. They came to Shirdi and brought the tiger near to Dwarakamai . The tiger was suffering from some disease and was weak. On seeing Baba, the tiger was saluting Baba. Baba looked into the eyes of the tiger deeply . The tiger also looked at Baba and shed tears. Seeing Baba thus it breathed its last. Thus Baba helped the tiger to merge with God.

Baba Sai became weaken day by day , he gave necessary directions to the devotees. He never did anything for himself. His life aim was to provide peace and happiness to all mankind. Baba as usual went out for alms to five houses and after collecting the food, put some in the Dhuni and fed the animals and birds with the remaining food.
Baba s body looked very weak. The eyes which were shining like fire, were sunken. Even then there was no change in his concentrated looks. He gave proper advice and udi prasad to the devotees who came to him. Devotee wished to recovery of sai baba . On the night of 14 October, even though he was seriously ill, he got up and made loud noise and hit the floor with his sataka. Everyone woke up at the sound. Then Baba explained his action by saying that thieves had come to Khaparde s house at Amaravathi and he drove them away. In his last hours also, Baba was thinking about his devotees only and not about himself.

The day was Tuesday, the 15th of October, 1918. Last day of baba physical body .It was Vijayadashami (Dushera) . Baba became bodily very weak, Baba got up as usual and sat in his place. Devotees came for his darshan as usual.Baba put his Abhaya Hastha on their heads, blessed them and gave them udi prasad. Baba gave them necessary advice as per their need. They took them as usual advice which Baba used to give, but failed to think that they were Baba s last ones to them while in physical body. Baba asked Laxman Mama, who was an astrologer and devotee , to do God s Namasmaran for some time.

The time was 11 in the morning.
Preparations were being made for noon Aarti. It appeared as if some divine light entered Baba. Aaarti was started. Throughout the Aarti Face of Baba was changing every moment. Those who looked at him had peace of mind and felt like looking at him continuously. During that period Baba appeared in different forms to the devotees present there. He appeared in the forms of Maruthi, Vittal, Dattatreya, Rama and to Muslim devotees as Mecca and Medina. For one Christian devotee, he appeared as Jesus. For Butty he appeared as Sri Krishna playing the flute in the Wada built by him.In this manner Baba, during aarti time, had shown his divine form to the devotees as per their thoughts.
aarti was over. The time was one hour past noon. Baba ordered all the devotees to go away quickly.All of them went away to their houses. Suddenly Baba had a brutal cough and he vomited blood. There, Tatya the devotee of baba who was also fighting with death , recovered and his pulse came to normal. Some new strength entered his body. He stood up and could walk also. He cried out of joy. He could not understand from where he got this new power all of a sudden. The spectators were also surprised. Before he recovered from his surprise, he remembered Baba. Thinking that Baba had given him another lease of life, he went running to the mosque.

By that time Baba leaned on Baija Appaji Patil and was telling him something secretly. Saying this, he warned him not to reveal this to others, otherwise, he would die. Tatya heard these last words. Baba was getting severe cough and was heaving. Whenever he coughed, blood poured out through his mouth and fell all over Dwarakamai. Beforehand Baba had asked his devotees to be without fear and sent them for their meals. But a few devotees refused to leave Baba. When Tatya saluted Baba, he asked Shama to take Tatya and leave him in his house. Shama returned after leaving Tatya in his house.

Lakshmi Bai Shinde and Bayyaji were the only ones remaining. She was near Baba s feet. Baba put his right hand in his shirt pocket twice, took out Rs.5 and Rs.4 and gave them as charity to Lakshmi Bai. Baba explained the significance of these nine rupees as the nine qualities a devotee should have (1)Absence of egoism (2) Absence of jealousy (3) Untiring service (4) Absence of worldly desires (5) Complete faith in Guru (6) Peaceful nature (7) Desire to know the truth (8) Absence of envy, and (9) Absence of self-boasting and finding faults in others. Unless a devotee improved these nine qualities, he could not have true devotion to reach God. Thus Baba taught to Lakshmi Bai even in his last moments.

Dashami ended and Ekadashi came. The time was 2.30 in the afternoon. Sai Baba told Bayyaji that he was leaving this body and after his body was to be kept in Butty Wada.he would be protecting his devotees at all times. He breathed his last giving charity and teaching Jnana to his children. This is the way the king of yogis – Yogiraja – attained Samadhi. The divine light which came out of the body of Baba, joined Gurudhan, Dwarakamai and Venkusa, who were already in the form of divine lights (jyotis) and all the four jyotis combined into one as Sai divine power. It again divided into four parts. One part went to Gurusthan. The second part when to Chavadi and settled there. The third part merged in Dwarakamai, and the fourth part went into Butty Wada. These four powers represent the four Vedas. These are the proofs of Sai Power which can command and control the whole world. The Shivashakti from Kailash came and stayed in Shirdi. In this way Shirdi became a holy place. The body of Sai who exhibited supernatural powers and saved several devotees, was lying in Dwarakamai.
The physical body of Sai Baba, lying in Dwarakamai, cannot be seen again. So let us imagine ourselves to be in Dwarakamai and touch the holy feet of Sai Baba and make our life meaningful. 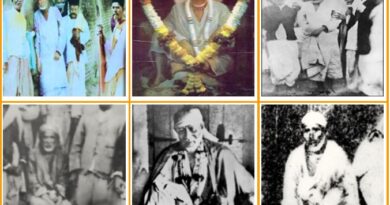 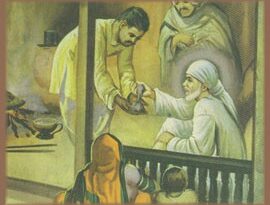 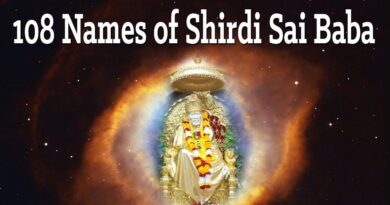